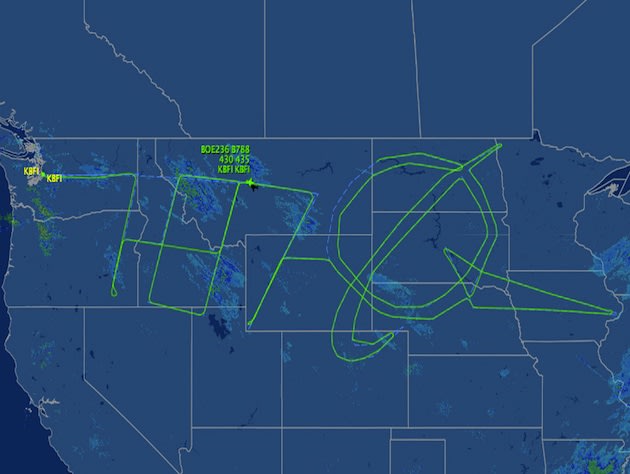 flightaware.com
A Boeing 787 jet took corporate loyalty to new heights when it "drew" the letters "787" followed by the company's logo across several thousand miles of North American skies. The etching of the letters and logo, while not visible from the ground, can be seen in the flight path plans.
"Boeing's 19 hour test flight of the 787 Dreamliner was a great opportunity to test the limits of the 787, FlightAware's flight tracking, and the FAA's flight plan system," FlightAware Chief Executive Officer Daniel Baker tells Yahoo News. "It was the longest domestic flight we've ever handled and it required three FAA flight plans to accomplish, not to mention dozens of people coordinating the flight overnight."
FlightAware, which provides live flight tracking, coordinated with Boeing on delivering the unusual and spectacular images.
In the above image, you can see the 787 Dreamliner's flight path, which was first reported by Gizmodo. The flight path was meticulously designed and coordinated with airports across the country in or to avoid violating restricted airspace.
"This wasn't a joy ride," wrote Boeing's vice president of marketing Randy Tinseth on the company's blog. "It was an 18 hour Maximum ETOPS (Extended Operations) Duration flight test for a 787-8 with GE engines. Our team coordinated with the many air traffic control centers, choosing the routing to avoid restricted airspace. In the end, the flight covered over 9,000 nautical miles." The path stretched between Iowa and Washington State.
Boeing conducted another sky drawing back in August, reports Wired, when the 747-8 Freighter outlined a "747" over several states. The BBC reported on the Dreamliner's maiden commercial voyage last October, traveling from Tokyo to Hong Kong.

It's an exciting time for air travel enthusiasts. Billionaire developer Paul Allen recently unveiled designs for his company's Stratosphere plane, which is designed to take passengers on commercial voyages above Earth's orbit.

Must have taken a lot of planning to do that. Very cool!!
S

I think Boeing engineers showed great restraint in drawing "787" and the Boeing symbol with their flight track, rather than the "**** YOU, AIRBUS!" originally planned.

ALPA proves there is no pilot shortage.
2

There is no pilot shortage! Sorry. By the way Santa Claus isn't real either.
2 3