(See Correction & Amplification below)
DUBAI -- After checking that passengers' seat belts were fastened and the cabin was prepared for takeoff, Alex Rodriguez, a 26-year-old Spaniard and Emirates airline flight attendant, reached into her pocket for a tube of bright red lipstick.
"I retouch it every 15 minutes," she said. "Otherwise, my supervisor will remind me."
Emirates' Glamorous Crew 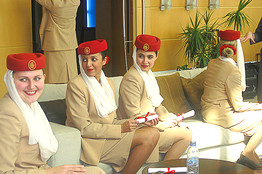 
Emirates flight attendants smile at the ceremony promoting them from economy to business class service.


The global economic slump is just now touching the glittering s************************* of the oil-rich Persian Gulf. But when it comes to the 10,000 flight attendants working for Emirates, the government-owned airline here, Dubai isn't cutting any corners. In an industry in a tailspin in much of the rest of the world, this city-state of man-made island developments, luxury resorts and an indoor ski slope has put some of the glamour back into air travel.
The glamour comes with a price. The airline is a demanding employer, flight attendants say. Tough rules are enforced, including some that would be deemed discriminatory in the West, such as weight requirements and a no-pregnancy policy for unwed women.
The carrier meticulously recruits attractive young men and women from around the world, like Ms. Rodriguez, a brunette with big green eyes and high cheek bones. As part of the airline's standard training, Ms. Rodriguez attended beauty and etiquette training. She's required to keep her makeup fresh, even on long flights. High-heels are a must when she's in uniform, even on the ground. Both men and women are expected to get manicures and facials.
Innocuous onboard flirting is condoned: Emirates' rules require attendants to politely accept a business card or phone number if it's proffered by a passenger. (The airline doesn't require the attendants to call or give out their own numbers, unless they want to.)
The uniform for women -- pillbox hat and beige scarf attached to one side, flowing sideways over the shoulder -- evokes traditional Persian and Turkish attire.
Earlier this month, dozens of uniformed and perfectly made-up Emirates flight attendants greeted and mixed with a star-studded, black-tie crowd, including Charlize Theron and Robert De Niro, at a $20 million grand-opening party for the new Atlantis hotel here.
"Our crew always sticks out," says Ms. Rodriguez.
Many of the airline's recruits are from developing countries in Asia, Eastern Europe and across the Middle East. For them, the airline is a rare ticket to see the world in style, and for women from conservative countries like Iran and Egypt, it's a chance for independence. For many Western airline veterans drawn here, Emirates has so far been a safe haven from the economic storms buffeting the rest of the industry.
View Full Image 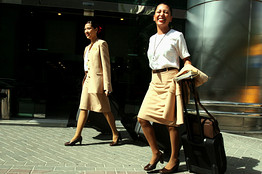 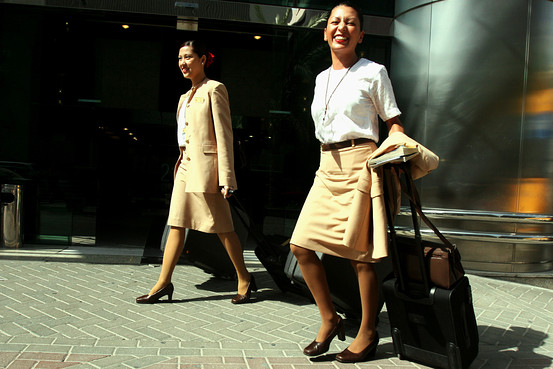 Layovers aren't so bad, either.
"We work hard in the air, but we also party hard when we are on the ground," said Neha Masillamani, a flight attendant from New Delhi, as she got her hair styled and her nails done at a crowded Dubai salon popular with Emirates attendants.
Young, single crew members are paired with roommates and housed in blocks of luxury-apartment towers across Dubai. The night life is reminiscent of college. Ms. Masillamani recalled a recent party at a room in the 21st Century, on Dubai's neon-lighted main strip. Female crew members danced in bikinis while young men sprayed champagne.
At night, flight attendants flock to Zinc, a throbbing night club tucked into the ground floor of the Crowne Plaza hotel here. Male attendants, hair gelled in spikes and sporting tight-fitting designer shirts, earrings and leather necklaces, order pitchers of vodka mixes. The manager of the club estimates up to 70% of its revenue comes from Emirates' crew.
"It's so much fun, like being on a dreamy vacation. They take care of us here," said Jane Park, a 24-year-old from Korea, dressed in a tiny black dress and stiletto heels as she greeted her friends and colleagues.
There are limits. Despite its tolerant attitude toward foreigners, Dubai still harbors a conservative Muslim culture. If a single female attendant shows up pregnant, she's fired. Openly gay male attendants need not apply. Premarital sex and homosexuality are both illegal in Dubai.
"We aren't above the law here," says Kevin Griffiths, Emirates' senior vice president for cabin crew.
On duty, attendants are kept on a short leash.
Crew members aren't allowed to drink in the 12 hours before a flight. Smoking and eating in uniform are prohibited. If an attendant gains too much weight, he or she is put on a diet by the airline's resident nutritionists.
A regulation manual prescribing everything from dress to posture on duty is also clear about the underwear women should have on under their light camel-color skirt and pants: white or beige, and "well fitted."
Young Women Preferred

Emirates draws young recruits. The average age of a flight attendant is 26. By comparison, the average age of an attendant on a U.S. flight is in the mid-40s, according to a spokeswoman for the Association of Flight Attendants. According to the union's statistics, just 12% of members in the U. S. are under 30.
Emirates also prefers women to men: Seventy-five percent of total flight crew must be female.
"It's a little stifling," says a 25-year-old European female attendant, who asked not to be named. "We are human beings, not just a marketing tool."
Emirates hasn't been immune to the current global economic downturn. The airlines posted an 88% drop in first half-year profit last month. But Valerie Tan, a company spokeswoman, said it is hiring more attendants to staff new routes to North and South America. And new planes are on order.
In the past 12 months, the airline says, it received 93,079 flight-attendant applications. Using photos, interviews, psychological profiling and group sessions with candidates, executives hire just 6% of job seekers. Recruiters hunt for promising hires around the world.
In some countries, applicants are put on a scale and weighed. (The practice is against the law in many Western countries because it's considered discriminatory, according to the company.)
After a six-week training course at Emirates headquarters near Dubai's sprawling airport, the airline graduates about 90 new flight attendants per week.
Less Pay, More Fun

Michael Miller, a 29-year-old from Miami, has flown with Southwest Airlines Co. and JetBlue Airways Corp. He says Emirates pays less than his former employers, but the perks and lifestyle are better.
Emirates also offers free living accommodations and transport to and from work. Married personnel are offered either company housing or generous housing stipends. The crew also gets up to 50% off at local bars, restaurants and health clubs.
Emirates' routes -- including nonstop flights to Los Angeles and São Paulo -- beat the U.S. domestic circuit, where most young American attendants wind up. And Emirates puts its attendants up at luxury hotels and gives them generous per diem allowances while traveling.
"I would have to fly 30 years in the U.S. before I could travel like this," says a bronzed Mr. Miller, lounging with a blonde colleague at the rooftop pool of one of Emirates' high-rise apartment towers. "There is no comparison to what we get here," he said.

slackass said:
There are limits. Despite its tolerant attitude toward foreigners, Dubai still harbors a conservative Muslim culture. If a single female attendant shows up pregnant, she's fired. Openly gay male attendants need not apply. Premarital sex and homosexuality are both illegal in Dubai.
Click to expand...

Ohhhhh, so that's where all the straight ones are...

"...Tough rules are enforced, including some that would be deemed discriminatory in the West, such as weight requirements and a no-pregnancy policy for unwed women..."

Oh gosh, you have to watch your diet and not get knocked up if you're still single.

That's just friggin' insane!
"Some men are born to rule, others are born to suffer under them." Unknown